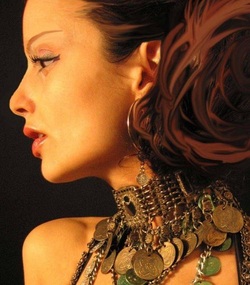 Muqaddess is a true dance and movement enthusiast and for her, a day without dancing is not complete.  Since childhood, she has been studying different forms of dance and experimenting with ways to expand upon them.  Being from the Middle East, she was surrounded by different styles of Middle Eastern folkloric dance and always had an interest in fusing multiple forms of dance from around the world into a unique expression of movement.  She was lucky to meet and study with the native dancers from Lebanon, Syria, Egypt and Morocco. This gave her a strong Middle Eastern and North African dance foundation and studying modern, Latin and Indian dances brought her a versatile style and performances in modern, Latin, Indian and belly dance in acclaimed venues in the Middle East and Europe.  She has dedicated her life to choreographing, performing and teaching dance and yoga while incorporating the joy and magic of dancing and creative movement into numerous students lives. 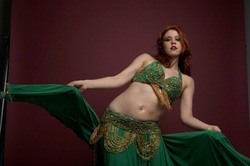 Kaitlin is an earthy belly dancer, who has been dancing, performing and occasionally teaching since 2000.  She brings an eclectic mix of modern technique to her belly dance performance. She has trained in Egyptian, Folkloric, Turkish and Tribal dance with a variety of teachers. She has performed as a solo artist with the Greek band, MAGGES, and at NYC venues such as Tagine, Mehanata and Sahara East.  Kaitlin has performed as a company member with Dalia Carella Dance Collective, Nadia Moussa Dance Company, and Morocco and the Casbah Dance Experience as well as with various modern dance companies in the New York area. 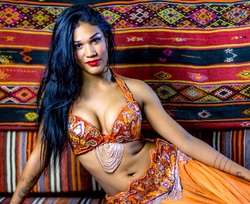 Hailing from Brooklyn, NY, Tatianna has over 16 years of experience, dancing & instructing children & adults of all capacities.  Dedicating herself to the exploration of World & Folkloric dance, her studies range from Traditional Belly Dance, Tribal Fusion Belly Dance, Bollywood, Tahitian Ori, West African, Afro-Carribean, Samba, Salsa & Hip Hop. She began at the age of 6, taking ballet classes at Carnegie Hall until she developed her passion for competitive figure skating at 13, entering the competitions at Sky Rink in Chelsea Piers.    At that age she developed a deep love for North African and traditional belly-dance, through watching a show with her family at a local middle-eastern restaurant.  She has been instructed by a variety of gifted teachers & studios: Tina North- American Tribal Style (based in Upstate, NY), BellyQueen & Serena Studios in NYC. Enriched by the discipline and dedication evident in their dancing lineage, Tatianna has recently focused her training under the Suhaila Salimpour & Jamila Salimpour technique at Sol Dance Center with her teacher, Irina Kom.  She continues her growth by attending regular workshops with Zoe Jakes from Beats Antique & Petite Jamila of Bellydance Superstars. A Stony Brook University graduate holding a degree in Anthropology/Archaeology and minors in Middle-Eastern Studies and Dance, she received a Gilman Scholarship award that enabled her to lived abroad in Egypt & Morocco for a year, performing field research that specialized in Egyptology & Religious Iconography/Art History. In Stony Brook, she explored classical folkloric dances spanning from Asia, Africa, Latin America & the Middle East. Rigorous courses in Modern, Contemporary, Ballet, Acting & Improv techniques, provided an excellent foundation into her dance career & helped to develop her emotional delivery in movement & intention. Inspired by her travels & collective dance experience, Tatianna made the decision upon her return to develop into a performing artist.  Her passionate expression exudes with "dynamic presence, emotional impact, innovation and strong technique." Tatianna uses dance as an impetus for change, serving as a belly-dance & yoga instructor in the Kandake House, a rehabilitation center for women recently released from incarceration.  Her goals include focusing on the empowerment/social liberation of women & the development of the human spirit through movement & awareness.
Powered by